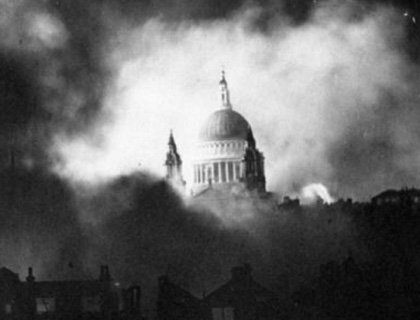 Availability: Thursdays and Saturdays from 3rd April to 31st October

London: Latest from the Blog

The Wartime London Tour, taken on a vintage London bus from the era, takes you back to a time when Britain fought for its very survival against Hitler’s horrifying war machine, a time when London was bombed for 76 terrifying consecutive nights in what would become known as the Blitz.

The Wartime London Tour takes place on a genuine 1930’s or 40’s London bus, with a knowledgeable, professional guide. A complimentary London pictorial guide shows many of the sites you’ll visit as they were during Britain’s darkest wartime hours, providing a fascinating ‘Then and Now’ comparison.

You’ll travel into the heart of the City of London, where some of the heaviest Blitz bombing occurred. You’ll see where the very first Blitz bombs were dropped, how parts of Roman London were uncovered by the destruction and churches that never recovered and remain in ruins to this day.

Passing over London Bridge, learn the remarkable effect the saving of St. Paul’s Cathedral had on Londoner’s and compare the modern skyline to how it looked during the height of Hitler’s terrifying 76-day campaign.

During a visit to the Imperial War Museum, see video and photographic material relating to the war, along with personal and official documents from the time.

The Wartime London Tour continues through Parliament Square and on to Whitehall, where you’ll see the statue of then Prime Minister Winston Churchill. Learn how Downing Street was protected before a visit to the site of the annual wartime fallen remembrance service, the Cenotaph. This is followed by a few moments at a monument commemorating the role of women in WWII.

The tour includes a visit to Grosvenor Square where many of the US Forces were based during the war, also home to statues of US Presidents Eisenhower and Roosevelt.

For the final part of your Wartime London Tour, you have the chance to either take a guided walking tour and learn how Buckingham Palace and the royal family coped during the war years or visit the Churchill War Rooms (admission not included) where Winston Churchill and his staff where to change the course of history.